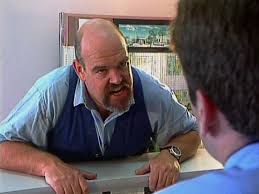 Customers in the queue behind him raised eyebrows and gave the young sales assistant, sympathetic glances.

“Am I right?” Joe demanded, as he handed over his credit card.

“The customer is always right,” Mr. Ford replied in a neutral and utterly indifferent tone that made clear his only motive in this scenario, was to earn enough money to obliterate himself over the festive season.

“That’s right,” Tiernan cackled, “because payback is a bitch!”

Although it was time for him to enter his pin-code to complete the purchase, Joe delayed doing so, in order to savour the moment, much to the irritation of Belinda Madigan, the customer behind him.

Madigan was impatiently holding a pair of black leggings identical to the eight pairs she already had at home.

“Last year I gave that asswipe The Wire, ok? And what does he give me? Buffy the Vampire Slayer!”

Before Mr. Ford could answer, Mr. Tiernan who had briefly left his office Christmas party to visit the store, cut across Ms Madigan’s repeated attempts at queue jumping.

“Yeah honey, your ass does look big in that,” he snapped, before punching in his code with a demented look.