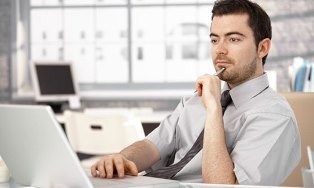 Returning to his work station this afternoon, after ‘laying some cable,’ real estate agent Dermot Aherne chuckled ruefully as he sat back down,.

The laughter signalling to colleague Marcus O’Clohessy (pictured above), that he wished to be consulted about the source of his amusement.

“Go on!” O’Clohessy inquired in a jocular tone that implied he ‘just knew’ his boss was about to serve up another of his trademark witticisms.

At this, Aherne swivelled in his seat and replied “I’m not joking here, one end’s in the water before the other end’s finished coming out?”

O’Clohessy rewarded Aherne with such a warm and spontaneous laugh that to an onlooker, he appeared genuinely amused by this witty apercu. Then he agreed there were few unmediated joys in life that could compete with ‘a good tip’. Especially, he observed, “if you’ve been ‘cooking’ it for a while!”

This appeared to be more input than Aherne required on the subject, therefore O’Clohessy changed course and inquired how Aherne’s new, high fibre diet was coming along.

Aherne briskly remarked that he wouldn’t advise anyone thinking of trying it, to stray too far from the plumbing.

O’Clohessy nodded thoughtfully, upon receiving this advice and returned to staring blankly at his screen.