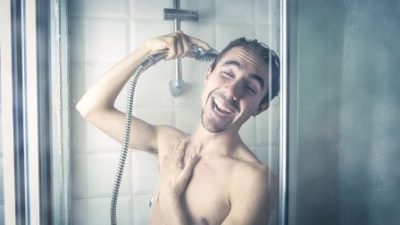 As he sang in the shower this morning, trainee estate agent Doney Russell suddenly realized this was exactly the kind of multitasking, longtime girlfriend and co-worker Catriona Egan always claimed, he was constitutionally incapable of.

“Well take that bitch!” the Roscommon GAA fanatic laughed, as he punched the air excitedly.

However Galway city-based Russell was so eager to share the news with her that he forgot to wash the soap out of his ass which became increasingly itchy as the day wore on.

In due course, his elation evaporated as he began to question whether this might actually mean he wasn’t truly capable of multitasking after all.

To make matters worse, when lunchtime arrived, he couldn’t decide whether to have a toasted ciabatta with beef medallions sandwich from McCambridge’s or a turkey, cranberry & stuffing sandwich from Gourmet Tart.

“You are one sad little fucker,” he thought to himself, as he gazed blankly at his screen.