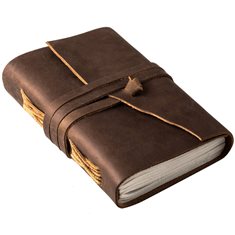 As John Blake this afternoon examined a handsome journal’s thick yellow sheets, he admitted racking his brains for something to write in it, that would justify the €45.00 price tag.

When pressed on the matter, the 32 year old agreed he’d purchased an identical notebook on a weekend city break to Paris, two years earlier.

But to be fair, Blake pointed out, he now realized he hadn’t then been truly ready to commit to writing because he’d immediately given it away as a birthday present.

Despite having no immediate plans to write now either, he reasoned that it was only a matter of time.

When the day finally arrived, he mused, he wouldn’t have to leave the house to buy the sort of notebook he imagined all writers owned.

“And I could really see myself writing in this one,” he added thoughtfully, as he weighed up the moleskin-bound volume.

As he paid the cashier, the notebook reminded him of the one Indiana Jones had carried and he realized he’d need to get a leather jacket to go with it.

Then he’d finally be able to start writing.