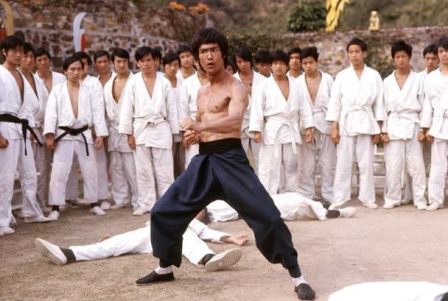 Shifting nervously as he watched the 1971 Kung Fu classic Fists of Fury for the first time last night, Martin Cotter took a rest from copying Bruce Lee’s high pitched screams and crammed another handful of dry roasted peanuts into his mouth.

As the 22 year old security guard yelled ‘Hi-yaa!’, he inadvertently inhaled some of the extra salty ‘nut dust’ that accumulates at the bottom of a packet and doubled up coughing.

However, even though his eyes were streaming, he fought back by taking a swig of lager and straightened up, to continue imitating Lee’s kicks and punches.

Cotter remained on the edge of his seat, as he watched Lee defeat ever larger groups of opponents, unable to believe his skill in scything them down.

Then he paused the programme to briefly fantasise about how, once he’d completed his door security qualification, he could legitimately assault the kind of nightclub customers he could never defeat in an argument.