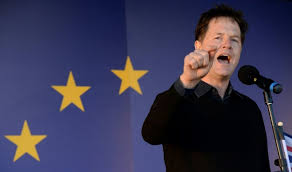 Lib Dem lothario and former party leader Nick Clegg, says he now has the contact details of all the former lovers who’ve unfriended him over the years.

Clegg also said it was vital he joined Facebook to ensure a salary of between £4m and £7m did not go to a member of the Leave campaign.

“Mr. Zuckerberg has allowed me to confirm my appointment,” he said, “despite the fact that I haven’t yet been branded in the company hazing ritual I am so looking forward to”.

In response to journalists’ cries of ‘Nick, surely you’re better than this!‘, he replied “I can assure you I’m not.”

The former deputy PM, who has boasted of bedding ‘no more than 30 women’ before he met his wife, admitted to being delighted to once again have phone nos for all his ‘old squeezes’.

But, he said coyly, “this time I promise not to make the first move”.

A Facebook spokesman denied there was any irony in a Remain leader jumping ship to work for the very platform that facilitated Vote Leave’s cheating in the Brexit referendum.

The Press Association says unconfirmed reports are coming in that Clegg broke down laughing, as he tried to sing Don’t Cry For Me Argentina in a karaoke bar last night.

It won’t be easy, you’ll think it strange
When I try to explain how I feel
That I still need your love after all that I’ve done

An unnamed bouncer claimed “he was fine for the first two lines but after the third, he totally lost it”.