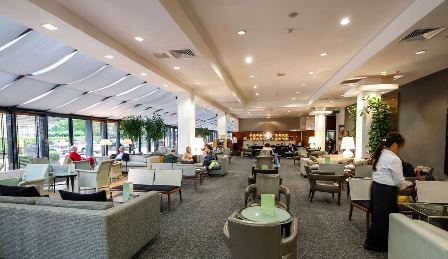 ‘Architect’s wife and mother of two’ Iseult O’Malley, (who is also a sister, a daughter and a niece), raised her eyes at next door neighbour Margaret Carberry, this afternoon.

The duo, who were having coffee in the spacious lobby of the Herbert Park Hotel, were discussing a development that had taken place after a meeting of their residents association the previous evening.

Long after the meeting was over and everyone had consumed a great deal of barrister Aubrey Veldon’s stock of Edmond Vatan Sancerre Clos la Neore, ‘something happened!’

“Dan looks myself and Peter in the eye,” Margaret explained, archly, “and then he takes Grainne’s hand in his and he says, and I’m not joking? He actually says to us, ‘I’m not ashamed to tell anyone that my wife is my best friend’.”

At this Iseult ‘screamed’ so loud, she startled the Filipino waiter who was standing nearby.

After a prolonged bout of sniggering, during which Iseult tried to figure out how she had missed this “priceless” moment, they agreed that Dan was “definitely having an affair”.

Or, as Margaret summed it up, “That’s ‘Curse of Hello‘ talk!”