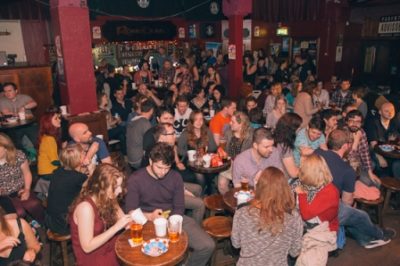 Amateur stand up Fiona Spender was inadvertently caught up in a hostage situation last night in Galway’s Róisín Dubh, after taking part in the pub’s Open Mic Comedy night.

After letting her guard down for a moment, she ended up cornered between legendary local bore Brendan Coyne and his girlfriend Chrissy who works alongside Spender in the King’s Head.

Coyne was laboriously explaining ‘the science behind why chicks aren’t funny’ – which he described as a killer routine she could use if she wanted to – when Spender was called back to the stage as winner of both the Audience Favourite and Judges’ Pick categories for the night.

Afterwards Coyne broke off from explaining to his girlfriend why the results were just ‘#Metoo sympathy votes’, to comment.

He said that while he was more than pleased for Spender, it was “her loss, big time” if she didn’t want to use his material and that he would use it himself in the following week’s open mic. “Provided, of course,” he clarified, “that I can get time off work to hone it?”