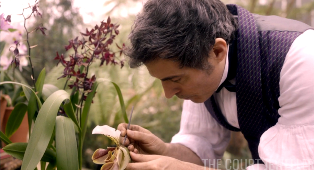 After 30 years working for ‘a well known syndicate,’ Bruce Mayhem was more than ready to call it a day.

But then, he told CatMelodeonNews in a strangely gravelly voice, “they pulled me back in”.

Nothing seemed right from the start, Mayhem recalled, but he went ahead with the hit anyway.

Mainly out of a misguided, old fashioned sense of loyalty that, apparently, had never been shared by his employers.

After a lifetime spent killing innocent victims, who somehow had all ‘deserved to die’ – mainly for a variety of montage-based crimes like having bad table manners – Bruce remained vague about what precisely had gone wrong on this occasion.

But, suffice it to say, he’d been upset by somebody and now, everyone had to die.

None of this need ever have happened, he observed once the slaughter was over, if only the murder & extortion industry had retained even a shred of ‘ordinary common decency’.

Essentially, it was the principle of the thing.

He could only hope, he added, more in sorrow than in anger, that lessons had been learnt.