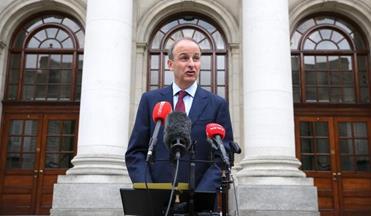 Micheál Martin has revealed that the cyber attack on the HSE, is also behind the housing crisis that has priced first time buyers out of the market.

“Unfortunately, we were so focused on the HSE,” he told reporters, “we didn’t notice the virus had spread to the Housing department where it wiped out the comprehensive plan I had for dealing with the problem”.

This, he added, is what has made the coalition seem to be stumbling blindly about, looking as if they were either unwilling or unable to address it.

“I want to assure you now,” the taoiseach said, “nothing could be farther from the truth.”

“Unfortunately, I can’t give you details of the comprehensive scheme the backroom boys and girls put together because I was planning to use it to wipe the sneer off the witch’s face,” Martin explained, “therefore I couldn’t risk it leaking by viewing it in advance?” The witch is understood to be a reference to SF leader Mary Lou McDonald.

Shockingly, he added, the cynical attack by the cybercriminals known as Wizard Spider, had left no trace of the detailed strategy, “it’s as if it never even existed”.

“If we’d known the risks,” he pointed out, “we could have backed it up on a floppy?”

A ‘floppy’ is a reference to an archaic form of computer disk storage, popular during Martin’s youth.

The Taoiseach’s greatest fear however, is not the Wizard but the Witch. It’s said he is terrified McDonald will lock the coalition out of government at the next election.

“And there’s no encryption key for that scenario,” he said afterwards.