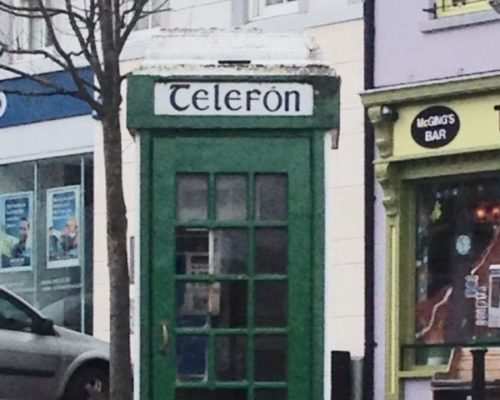 Taoiseach Micheal Martin has announced emergency funding of €5,000 to bring dial-up internet access to County Mayo, “whether they want it or not!”

Martin said said this would be done by installing an internet capable phonebooth in each of the five town squares, where the population was in excess of 2,500 in the 2016 census.

The five ‘IT hubs’ in Castlebar, Ballina, Westport, Claremorris & Ballinrobe would ‘kickstart’ the online sector, he said, “in the most offline part of the country”.

“This funding will be ‘ringfenced’,” he added, “to ensure this incredible opportunity for Mayo to make contact with the rest of the country, is not lost…or ‘losht,’ as they say up there”.

And, he said, the benefits will be enormous, as it will soon be possible for anyone to queue up to use one of the phone boxes in each of these town squares.

“They’ll be able to send an email to their long lost relatives in America, download a song in no more than ten minutes or an entire movie, in just under three hours.”

The Screaming Healy-Raes immediately jumped to their feet screaming.

The skinny one objected to “spishal ixpinditchoor for wan countaay whin it should be made available forr all”.

However they apologized and sat down again quietly, when reminded the smallest of Kerry’s hundreds of extra government subsidies – its annual Haitian Limbo Dancing allocation for Kerry sheep farmers who’re trying to give up smoking – is eight times greater than Mayo’s tiny, once-off connectivity allocation.