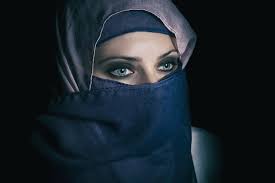 Najate Amas, a French Muslim who in 2011 was fined for covering her face, complains she has now been told by police to cover her face.

In response to the pandemic, the mayors of a handful of French towns have made wearing a mask compulsory.

“Off or on, zey should make up zeir minds,” she shouted at reporters in heavily accented English outside the town hall of Meaux, west of Paris.

“Macron est un merkin,” she spat, as she left, initially refusing to explain this insult but eventually clarifying that a merkin is a pubic wig.