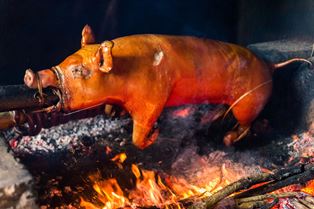 At the wrap barbecue for Charlotte’s Web, producer Jordan Kerner confirmed that none of the trio of ‘adorably cute’ piglets used to portray Wilbur – the porcine star of the movie – had been harmed in any way.

“But afterwards,” he continued, “they were knocked unconscious with a  stun gun before being quickly strung up by the legs and stabbed a couple of times with an 8 to 10 inch blade? That was to allow them to bleed out into a bucket? Preferably a pretty big one because they swing about a heck of a lot, what with all the twitching they’re still doing? It’s really kinda interesting.”

“But I’d like to stress the fact that I treated them like my very own children,” the producer explained, “right up until the moment I didn’t? I think it’s important to put that on the record.”

“Never mind those animal rights nutters outside the gate,” he grinned at Beau Bridges, as he scoffed a second juicy helping of one of the piglets.