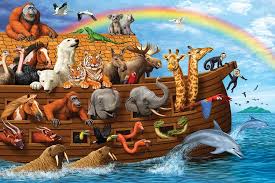 The latest ‘discovery’ of the site of The Ark, brings the total number of times it’s been found in various different places, to 26. The majority of these discoveries have been made on on Turkey’s Mount Ararat.

The latest one means The Ark moves one place ahead of the Tomb of Jesus in the hotly contested ‘Most Discovered Biblical Site‘ rankings. Insiders say the tension within the evangelical archaeological community is unbearable, as discoveries of the two holy sites have been leapfrogging each other, for more than a decade in this nail-biting race.

Professor Paul Esperanto, the 23rd Christian evangelical said to have discovered The Ark, said he hopes to attract major funding for his one. “Hopefully from one of the many, many right-wing American billionaires, interested in owning an ark?”