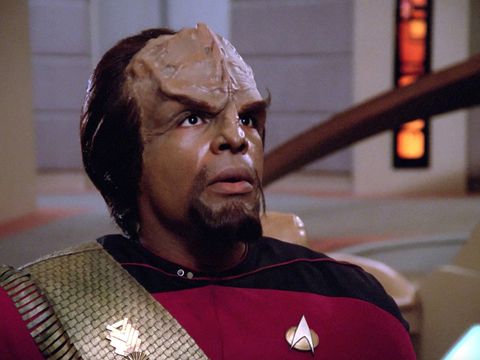 A proposal to offer Klingon as an option on the NUIG BA in Global Languages degree, has split board members and provoked a bitter row amongst academics.

However within the Klingon-speaking community, the proposal has been greeted with widespread grunts of approval.

The Irish Department was scathing, with one lecturer declaring “the obscure guttural language course is our USP and we’re not sharing that space with anyone.” Speaking off the record, a member of the English Department sniped “This week marks the 50th anniversary of Raidió na Gaeltachta? As far as most people are concerned, they might as well have been broadcasting in Klingon since day one.”

The main opposition to the proposal is being led by the two lecturers who teach a 20 week Introduction To Chinese course at NUIG. “Frankly,” one spat, “we’d rather see Mongolian taught than Klingon!”

It’s thought that the celebrity-mad group that nominates candidates for NUIG’s honorary degree awards are behind the Klingon proposal. They’re said to believe it will entice American actor Michael Dorn ( who plays Worf in the Star Trek franchise ) to accept a degree.

Dorn has been confirmed as the first guest invite for Dublin’s Comic Con in August. Although he has yet to respond to the NUIG invite, the committee are confident that offering Klingon will induce him to accept.

Insiders say the committee calculates it can then lever his acceptance to reel in the ‘altogether classier’ Rada trained actor Patrick Stewart who “does Shakespeare and all that posh stuff”.

“If we get him,” a member said, “then bingo! It opens the door to a conveyor belt of Hollywood celebs that will allow us to ditch the usual filth we have to deal with?” When pressed for recent examples, he said, “academics, authors, academic authors, senators, provincial newspaper editors, bird watchers, sheep dippers and three card trick artists”.

Macnas have already been enlisted to act as ‘brand ambassadors’ for the plan and are reported to be keen to have the pair lead a Star Trek themed parade through Galway’s streets. However Druid Theatre have sniffed that they can offer “something the ‘fireworks and face paint’ crew, simply can’t compete with.”

President Miggeldy Higgins later announced that he had written a poem in Klingon in honour of NUIG’s courage in considering “such a brave and inclusive move”.