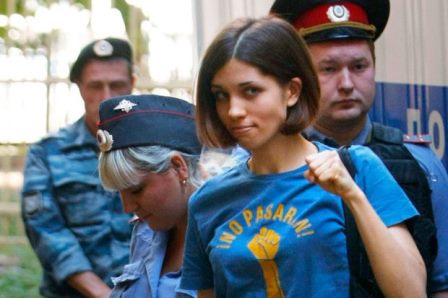 Donald Trump has declassified a controversial memo from the Barrack Obama administration revealing he pleaded with Vladimir Putin to release the group, jailed over an ‘unauthorized’ performance in a Moscow cathedral.

Trump said it showed he was no different to his predecessor in seeking to maintain good relations with the Russian premiere.

A transcript of a phone call between the two leaders, records Obama’s attempts to soothe an early release for the the group.

“If they were jailed for anything,” he said, “it should have been false advertising, right? Because goddamn, they couldn’t sing a note! But worst case, that should only mean community service, not two years in the big house…”

The transcript says Putin protested he could not intervene, due to ‘the independence of the judiciary’.

“Vlad, Vlaaad? Work with me here,” Obama interrupted, speaking over him at that point.

He then says “At least free Nadya, yeah?” before the transcript records the conversation ‘descended into sniggering’.

A moment later, the report records Barrack exclaiming “Niggah, that bitch is smokin!”

The conversation ended hurriedly when a staffer called out ‘Oprah! Oprah!’ (the ‘safe word’ Oval Office staff used) to signal the imminent arrival of the first lady.