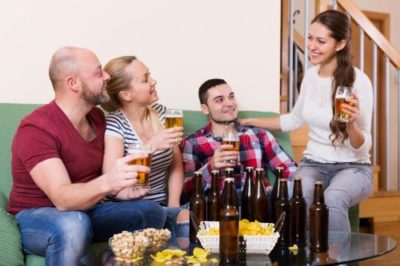 After her third beer, shy stay-at-home mom Deirdre Waldron decided to try one more time to overcome her tragic record of being unable to tell a joke without ruining it.

Nervously, the 28 year old steeled herself not to give away the punchline, before the end of the story.

Waving a hand for silence, she called out to her husband Tiernan and their neighbours Al and Danielle Flynn, “A man buys a second hand parrot, ok?”

“And he takes it home to his wife”, she said, confidently enough.

“But it’s very rude, ok, so…he puts it in the fridge…”, she continued “and when he takes the parrot out it says, ‘What did the chicken say?'”

Suddenly she put a hand up to her mouth. “No, I mean do? The parrot said ‘What did the chicken do?’ because you see there was a chicken in the fridge already – or was it the freezer? Sorry, I meant the freezer…Oh no, I’ve ruined it!”

She laughed nervously and their neighbours joined in good naturedly.

“Never mind, I’ll tell it again,” she then said, encouraged by their good humour response but not before her husband intervened.

“You can’t tell it again!” he said angrily, “it doesn’t work like that? If you blow it, you blow it!”

“Fine,” she snapped, in the awkward silence that followed, “I’ll never blow it again. Ok?”

As their guests hooted and laughed, Mrs Waldron accepted high fives from the neighbours while even her sheepish looking husband was forced to smile.