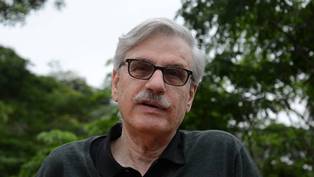 “I used to think I was a new man,” Dave O’Malley reminisced to postman Tomislav Horvat this morning, “when I was a young man?”

“But that was a long time ago and things were very different then? For one thing, the mullet was very cutting edge. And so was the phrase ‘cutting edge’.”

For another, he continued, as the Croatian national stared blankly at him, the bar was set pretty low, back in those days.

“Basically, if you made two antenatal classes and the birth, everybody said you were one but nowadays, you can’t be one unless you’ve given birth.”

“Cleaning doesn’t count anymore either,” he mused, ignoring the recorded delivery receipt Horvat continued to hold out for him to sign.

“Because at the end of the day, only a young man would buy the idea that a jury consisting solely of his own wife, is ever going to agree he can clean as well as she can?”

“And that, Tomislav my friend,” he concluded, tapping him gently on the chest, “is the real reason why there’s no such thing as a new man.”