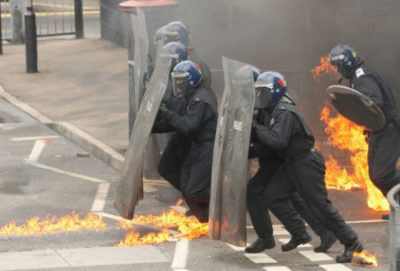 A riot broke out in the Connemara village of Ballyconneely overnight, after a local radio announcer misread a ‘Status Orange snow warning’.

Having inadvertently spilled coffee over his script, newsreader Antoin de Búrca mistakenly warned locals that up to eight centimetres of ‘Orange snow’ had been forecast to fall overnight.

The Garda Press Office said that a “by then, emotional gathering of the Connemara Pony Breeders Association” who were drinking in the back snug of The Banshee at the time, “took the news hard”.

“Dan Patsy Barry is known to have the gift,” bartender Pól Mac Donnchada said. “And after he stood up and screamed ‘This was all foretold,’ the place went apeshit, if you’ll pardon my French.”

Survivors said a turf cutter, still unhappy with the outcome of the 1987 Rod & Licence dispute, ‘started it all’ by biting an ear off the manager of a plant hire company who recently underbid him for the contract to clear a patch of Údarás land at Ros a’ Mhíl.

It was more Billy Connolly, a local wag said, than Ballyconneely.