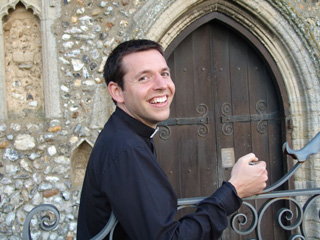 Over coffee, parish secretary Mary Duddy yesterday conceded her long-awaited ‘Brief History Of The Parish‘ was “not a comprehensive record” of events.

Pidgeon understood this to mean the history made no reference to the time Fr Mike lit out for The Galway Races with the Bingo fund under one arm and 23-year-old Vietnamese cleaner Dang Thu Thao under the other.

Ms Thao was an amateur, I Ching fortune teller who convinced him “big luck money” awaited him at the Ballybrit racecourse, based in part on the astrological star chart she’d made him as a birthday present.

Father Mike – who was later described by a psychiatrist as “an emotional adolescent when it comes to dealing with women in general, never mind an ‘exotic’ young woman like Ms Thao” – went on a week-long bender after losing the entire fund of €42k on the first race.

Despite the fact that the bishop declared an ‘MIA’ emergency, cancelled all clerical leave and mounted a major ‘search and locate’ operation, the diocesan extraction squad was unable to ‘triangulate his position’ for over a week.

When the popular PP and acclaimed crooner was eventually found at midday on the eighth day, he was singing for drinking-money down by the docks, in a ‘Connemara poncho’ he later claimed to have won off a trawlerman while playing Texas Hold’em on the Aran Islands.

Fr. Mike panicked halfway through ‘I Got Friends In Low Places‘, when he spotted the intervention squad approaching but in his haste to get away, he ran into a passing cyclist who was thrown over the handlebars as a result of the collision.

The man sustained no injury however due to the fact that it was race week and he was – as he himself put it – ‘drunk as a bishop at the time, so to speak’.

Happily, in what was considered a major coup for the diocese, Fr. Mike was “harnessed and ‘habbed again” in time to lead the annual pilgrimage to Lourdes, just six weeks later.

“Jammy dodger?” Pidgeon inquired archly, as she held out a saucer of biscuits.