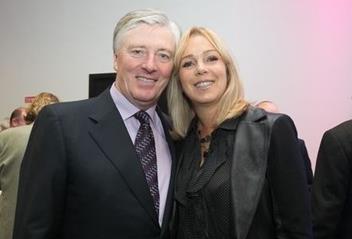 Pat Kenny’s wife Kathy today wheeled her glamorous husband out before the media, to prove that he is ‘very much his own man’.

But before he spoke, she explained she’s keenly aware that there have been unkind whispers to the effect that “Pat plays ‘Harry’ to my Meghan”.

“I know,” she laughed into the silence that greeted these remarks, “where do they get this stuff!”

Kathy said the Newstalk presenter would be making a brief statement before taking a no of questions that had been cleared in advance, “and I suppose it might be useful if I were to very quickly run through the sort of thing he’s likely to say?”

“First of all, I have no doubt he’ll will be making very clear that he is not in fact ‘terrified’ of crossing me in any way,” she said, using her fingers to suggest quotation marks around the word ‘terrified’, “ok?”

“He will also quash the repeated suggestion that I insist on certain topics being regularly featured on the show and also, how they are covered?”

“And finally,” she said, “he will bring you all up to date on our latest battle with the greedy developers who want to despoil the natural beauty of sites adjoining our humble little home in Dalkey village.”

She then stood back and announced, “Ladies and gentlemen, I give you – Pat Kenny!”