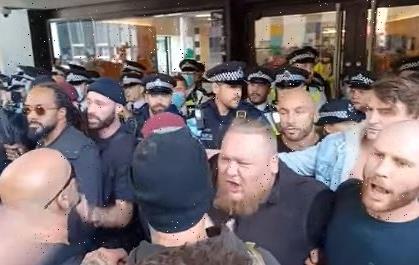 In a development that took few this side of sanity by surprise yesterday, the people who are too clever to believe “the British Brainwashing Corporation,” proved unable to locate the BBC’s publicly listed HQ.

Instead, the anti-vaccine group stormed a building vacated by the corporation in 2013, presumably because “independent research” had proved the BBC never moved to Portland Place.

Afterwards, several of the protestors – who all see themselves as clued-in and media savvy individuals – were heard asking each other things like, “Was it was fake, fake news?”

“Metropolitan police farce,” one shouted, as the group were asked to leave.

A police spokesman later confirmed that most of the protesters belonged to the same group that earlier this month, staged an anti-lockdown protest, after lockdown had ended.

“People in need,” he sighed, as he surveyed ‘the barmy army’.