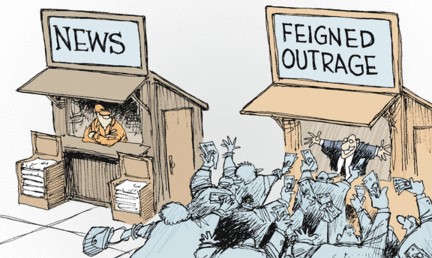 The fire that broke out at DUP headquarters – Northern Ireland’s largest manufacturer of synthetic outrage – has now spread to the warehouse where fabricated offence has long been stored in large quantities, in complete disregard of Health & Safety regulations.

As the blaze raged, cannisters labelled ‘Royal Snub,’ ‘An Insult To All Unionists’ and ‘How Very Dare You!’, could be heard exploding late into the night.

The party’s MPs, taken by surprise, were forced into making up new offences on the spur of the moment. The trust they had never professed to have in the president in the first place, for instance, was now said to be ‘irreparably damaged’.

Likewise, the ‘hopes and dreams of an entire generation, of living in harmony with nationalists’. Although the DUP stressed it would still, of course, support the Orange Order’s efforts to march through their neighbourhoods every year because to do otherwise would also be ‘an unforgiveable affront to her majesty’.

It was all so unbearably sad and so easily avoidable, conflict resolution counsellor Gregory Campbell sniffed.

Asked to clarify if both of those groups were the DUP, he replied, “Of course!”

Meanwhile, the party has vowed to continue stoking ‘the row’ until someone – north or south – figures out how to get them out of the hole they dug for themselves over Brexit.