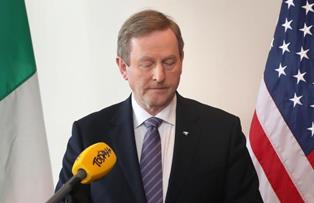 ON THIS DAY…November 6, 2014: A new poll reveals the Taoiseach has lost the support of the key Mayo Embalmers demographic, a constituency that now supports having him euthanized sooner, rather than later.

Backbench Fine Gael TDs however, said they were not alarmed.

“Have you heard him speak?” one sniggered. “He sounds like he’s already been embalmed!”

Another claimed “in public we say he’s formidable, in private we say he’s formaldehyde”. Asked about losing the support of a group of voters that were once devoted to the Taoiseach, he answered, “the embalmers will come running back to us, the minute he gives their annual dinner one of his ‘talking-plank-speaking-through-a-chloroformed-rag’ impressions.”

The poll interviewed almost a thousand people face to face and generated an unprecedented amount of saliva.

When Morning Ireland’s Aine Lawlor asked the FG leader if the protests would topple the government, he became evasive.

If I were a carpenter, he replied, and you were a lady, would you marry me anyway, would have my baby?

Asked what this meant, he said it wasn’t for him to say, before claiming “I can’t hear you, the line is breaking up”.