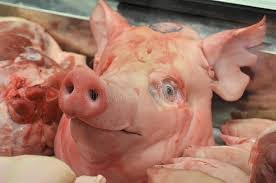 Scientists who’ve ‘rebooted’ a dead pig’s brain, say they were surprised when it told them it wants to talk about “the whole Cameron thing”.

The pig is thought to be referring to then student David Cameron’s initiation into a notorious Oxford University drinking club, the Piers Gaveston Society, during which he allegedly put ‘the pink oboe’ into a pig’s mouth.

In 2015, Tory party donor Lord Ashcroft, published a book detailing the claim but shortly before it could be called before a committee to answer questions about the incident, the pig was put ‘beyond further use’.

It’s understood the pig told researchers that while it came from a good family and was quite prepared to accept a ‘traditional stuffing’, it never expected to be given the full ‘Compassionate Conservatism’ treatment.

The researchers recorded the experiment in which the pig is heard to say, “Quite frankly, it happened so quickly, I was completely taken by surprise because I assumed he was going to put an apple into my mouth…”