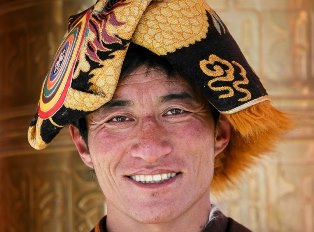 NUIG student Brian Boran spent Sunday evening in Tigh Coili pub where the consensus among the regulars was that his Tibetan hat was generating as much attention as a chronic exhibitionist could reasonably hope for.

The Tourmakeady native was flustered by accusations he bought it on Ebay, despite claiming to have acquired it during a visit to Tibet.

As the evening wore on, he found himself gently elbowed to the rear of the pub for breaching ‘session etiquette’ by talking too loudly about how he was “really giving ‘the normos’ something to think about”.

He eventually left after attracting attention of a different kind, due to continually shouting ‘Nancy Spain, Nancy Spain‘.

Reluctantly accepting the barman’s sincere invitation to “fuck off outta here now sharpish, before I kick your hole?”