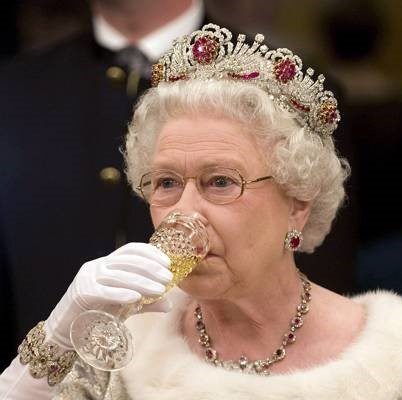 Buckingham Palace has informed No 10 that the Queen is to get ‘totally fucked up’ tonight, to mark the end of a 55 year wait for a knockout victory over Germany.

Royal watchers say she’s likely to break her normal routine by having a second Babycham and ‘that should do the job’.

Palace servants later reported hearing the sound of high pitched laughter coming from the Royal bedchamber, as she watched the replay.

Afterwards one reported hearing her majesty singing, “Can I introduce you please, to a lump of cheddar cheese, knit one, pearl one, drop one, curl one” while another said that silence finally fell, only after a sustained blast of “Champee-oh-nes, champee-oh-nes”.

A statement subsequently posted on the palace website said, “No calls before noon tomorrow”.

The build up to the celebrations began earlier today, when fans began screaming “Football’s coming home” into their own vomit, before the final whistle had blown.

An ecstatic Boris Johnson tweeted that he was going home immediately “for a bloody good beat of ‘the wife,’ as is every true born Englishman’s entitlement and quite rightly so”.

Many England fans reported they were so choked up, they couldn’t even chant, “Two world wars and one world cup”.

The Daily Mail has called for the entire team to be knighted and for June 29th to be declared a national holiday while the Daily Telegraph wants Wembley Stadium renamed the Brexit Bowl.

The Daily Express predictably enough, said “Hande hoch Schweinehunde, for you ze tournament is over!” and warned that Germany could not be trusted to honour the result and would appeal the final score to FIFA.