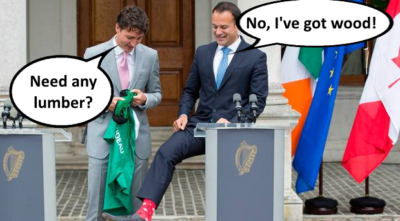 While most of the coverage of Trudeau’s visit centred on socks and ‘bromance,’ behind the scenes Justin and Leo were discussing the best way to ram the Canada-European free trade deal through.

All 27 European legislatures must ratify the deal before it can pass and most of the talks were spent ‘strategizing’ on how to push the legislation past Irish and Canadian objectors.

A government spokesman subsequently denied the talks could be characterized as, ‘a love-in about forced consent’.