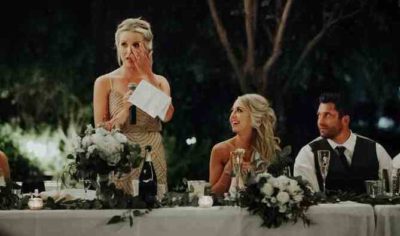 Ward was attending the wedding of 32 year old Bob Norton and 29 year old Edel O’Leary at The County Arms Hotel in Offaly.

‘Bono’ and ‘Fidel’, as friends “affectionately” call the highly opinionated groom and high-handed bride, were celebrating with 250 guests.

Ward had already texted a link to their FB page which referenced their wedding, to say, “This is what happens when a ‘total foodie’ meets a ‘hardcore fashionista’ on facebook!!!!”

Afterwards he added, “That was the groom’s only ‘joke’ btw.”

The bill for their elegant reception was paid for by the bride’s stud farm-owning, conservative-leaning parents, Tom and Alexandra Keogh.

The Mullingar-based couple are known locally as ‘Major Tom and Brandy Alexander’, on account of the former’s army career and the latter’s fondness for the cocktail.

They frowned as chief bridesmaid Carmel McCutcheon, a compulsive talker, unsteadily got to her feet

Ignoring the long and widely established practice of bridesmaids making wedding speeches claiming to “challenge the patriarchy”, she loudly announced she was “breaking with tradition”.

Women today are no longer prepared to “sit silently by”, she declared, and help perpetuate a misogynistic practice.

Momentarily distracted by widespread laughter at the idea that she was capable of silent witness, she quickly rallied.

“I call on ‘Mná na hÉireann’ to join me here and now in ‘forsaking the role of the mute handmaiden’ by helping to give women a voice.”

As she sat down, the male guests gave her a thunderous applause, stamping their feet and crying for more.

Afterwards she confirmed to the bride’s mother that she would indeed be more than happy not to challenge the misogynistic practice of having the bride’s father pay for the professional hair and make up for the bridesmaids.

Before spoiling the moment by inadvertently adding, “Thank you, Brandy“.