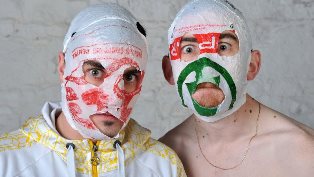 Gardai have revealed the Limerick duo’s hit single, ‘Horse Outside,’ was cleverly calibrated to cause a near total collapse in Limerick’s second hand Mitsubishi car market.

This then allowed the pair to acquire a local second-hand Mitsubishi dealership at a rock bottom rate which they sold on for ‘big bucks’ when the market recovered.

At the same time, they are believed to have disposed of 250 piebald horses, for a sum estimated to be in ‘the three figure’ price range.

“Despite their ‘right on’ image,” a garda spokesman said, “this caused great hardship in the ‘pre-owned’ Mitsubishi market which The Rubberbandits showed no reluctance whatsoever, to exploit.”

“They call themselves The Rubberbandits,” he said, “but they really are bandits, so they are, so they are.”

Gardai later confirmed the ‘horse outside’ failed a drug test on its way home on the night in question.