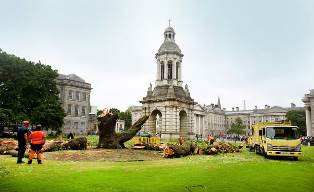 Scenes of high emotion dominated a special meeting of the cabinet Monday morning, called to discuss the collapse of an ancient, disease-ridden tree in Trinity College over the weekend.

Trinity graduates around the world had already reacted by making their traditional preening noise, at any mention of their alma mater.

The Taoiseach outflanked his colleagues before the meeting began, by tweeting: “I remember getting sick into my own vomit under that magnificent tree, during the Trinity Ball”.

Finance Minister Pascal Donohoe excitedly told his colleagues that “the whole thing was like the plot of a James Bond movie!”

In response, Transport Minister ‘Lord’ Shane Ross sneered at him like the Bond villain Blofeld and said he could remember when the 170 year old tree was still “just a sap-ling Pascal…if you know what I mean?”

“The Queen walked past it once,” Donohoe snapped bitterly.

After a moment’s silence for the tree, interrupted only by muted sniffs, conversation turned to less urgent topics like the homeless crisis.

Later in the day, the UCD Science Department issued a statement saying they could now prove that if a tree falls in Trinity, tears fall on the cabinet table.