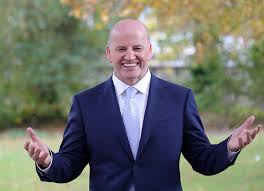 A row has broken out after a poll conducted by The Irish Times found the public failed to notice the absence or presence of Sean Gallagher, during presidential debates.

A majority of respondents were unable to identify any of the candidates, other than President Michael D. Higgins.

A mournful Gavin Duffy immediately blamed the poor results on fellow ‘Dragon’ Sean Gallagher, whom he said, “sounds like a hairdryer”.

“I wish I’d said that,” barked ‘maverick’ candidate Peter Casey when contacted for comment, “but none of this matters because very soon I will appoint my second wife, Helen, vice president of this great country of ours”.

Casey claimed a recent press release that referred to Áras an Uachtaráin, as Arse an Uachtaráin, was distributed by his political rivals without specifying any particular campaign.

Liadh Ní Riada said she did not accept that omitting to put the Sinn Fein party’s name on her posters was a mistake that consigned her to oblivion, along with all the other ‘also rans’.

Joan Freeman said the poll showed just how cold a place the world of politics could be, “when voters don’t even notice a presidential candidate”.

She then hastily clarified that she had been referring to Sean Gallagher and not herself.