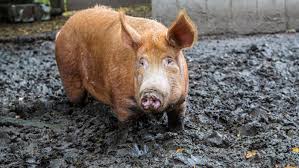 President Trump, pictured above working on his legacy, has tested positive in what is believed to be only the second case of a pig succumbing to the virus.

Ever since March, scientists have been struggling to explain why a pig like Boris Johnson could could fall victim to it, when a swine like Trump did not.

White House press secretary Kayleigh McEnany claimed the development was simply part of the president’s ongoing strategy to “own the libs”.

Meanwhile, the World Health Organization says that although a Brazilian pig, president Jair Bolsonaro, contracted the virus in July of this year, it’s believed this was due to the fact that he regularly shares bodily fluids with his wife another pig.

Therefore for statistical purposes, the WHO said, it ‘does not regard him as a pig who contracted the virus under normal circumstances, as Trump and Johnson did’.