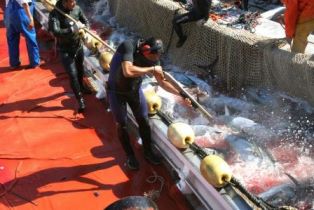 The South African trophy hunting industry has started offering ‘shopping mall safaris’ to Americans who want to kill something defenceless but can’t afford an overseas trip.

The highly popular Shooting Fish in a Barrel experience, the brochure says, is the closest you can get to killing something faraway and helpless with a high powered, telescopic rifle.

“In so far,” a spokesman clarified, “as you’ll be shooting it up close with a shotgun?”

The fish may have to be stalked for a moment or two, he warned sternly, under the relentless glare of artificial strip lighting, in a ‘conservation through game management’ exercise that ‘the goddamn liberals just don’t understand’!

Asked by a reporter to comment on an authoritative new study that has found trophy hunting is having negative impacts on wildlife populations, he replied, “Well even if that’s true, it sounds like fake news to me”.

Further asked if he was aware trophy hunting also has extremely close links to poaching, he replied, “Eh…maybe it’s the other way around?”

For an all-in price tag of $200, he added, the company will also take photos of customers posing with the fish they have blown to pieces at close quarters and post them on websites likely to disturb normal people.