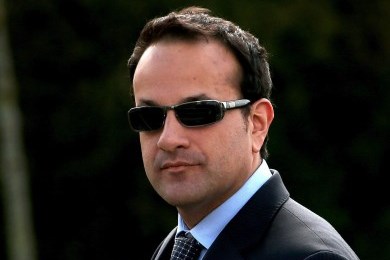 ‘Ah now,’ a slithery FF Hoor said in Leinster House this week, as he tried to stifle a chuckle.

‘One has to ask where the motivation for such a cynical idea comes from,’ another said, wiping an appreciative tear from the corner of his eye.

The pair were supporting a fellow TD’s attack on Taoiseach Leo Varadkar, for even thinking of creating fake social media accounts to promote his party’s policies.

Privately, a straw poll of FF TDs suggested Varadkar was in the running for the party’s annual Mussolini, also known as the Cute Hoor of The Year Award.

Set up in memory of the party’s legendary spinmeister PJ Mara and his ‘Una Duce’ briefing to the press, the Mussolini recognises the slitheriest, most successfully underhanded parliamentarian of the year.

Although it is tacitly accepted that by definition, receiving the award tends to undermine the suggestion that the recipient excels at ‘backroom’ politics.

Nevertheless, they suggest, on the available evidence, Varadkar could be set to join previous winners like Bertie Ahern, Pee Flynn and Ray Burke to name just a few.

If not, one added, he’s a shoe-in for FG’s Smirking Cunt, the award set up to recognise Frank Flannery’s decades long contribution to parliamentary backstabbing, double-dealing and character assassination.