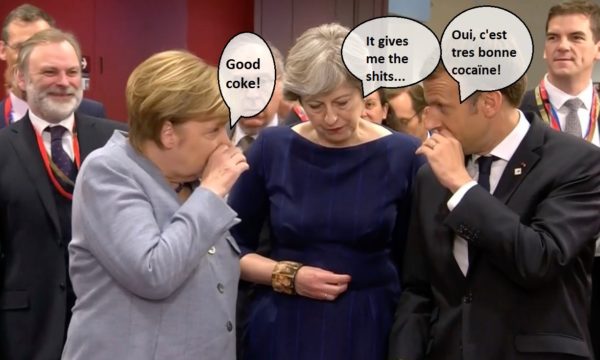 “Look,” German chancellor Angela Merkel told reporters, “you know what these five course dinners are like. You need a little blow before the speeches begin…just to clear the cobwebs away, ja?”

“So myself and President Macron or ‘Mac,’ as I prefer to call him, nipped out the back for a laugh. For a Frenchman he’s not so bad and he really does have a thing for older girls, you know?”

‘Mutti’ paused briefly to hold one nostril and noisily inhale through the other before repeating the manoeuvre with the other nostril.

“So anyway,” she said, “what does old ’50 Shades of Beige’ do? She only gets up and follows us out, just to tell us she’s not interested!”

Frau Merkel added that “of course, the whole place twigged and every bootlicker in the building traipses after her, grinning like they’re going to get some too.”

Before May could say anything, Mutti said he wagged a finger at her and quipped ‘May non!‘

Observers confirmed the PM just stood there with her mouth open, blinking at them, while they ‘wet themselves’.

Man Who remembers ‘Days When You Could Leave Your Key In The Front Door,’ Admits He Had Nothing Worth Stealing