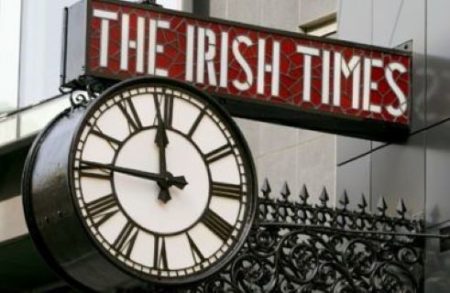 Insiders say the long simmering feud between Irish Times columnists Stephen Collins and Newton Emerson finally broke out into the open today, with a ferocity that took those who witnessed it, by surprise.

Staff say that when Emerson – a rare visitor to the paper’s Tara Street offices – arrived at the building this morning just ahead of Collins – an even rarer visitor – he failed to hold the door for him.

A clearly incensed Collins caught up with him in the lift and remarked, “Well if it isn’t ‘wee Newty’, the fellow traveller!”

Without looking at him, Emerson is said to have observed it’s “wonderful to see ‘the grand old lady’ can still get out and about”.

Friends of the two, known for their trenchant criticism of Sinn Féin, say they are too alike to ever really get on.

One said he feared the pair may ‘never play bridge again’.

Collins is said to bitterly resent Emerson’s failure to fully embrace his stance that Sinn Féin alone – and not the cash-for-ash controversy – was responsible for the collapse of the northern executive.

“Next time they meet,” the receptionist quipped, “I presume we’ll get a trigger warning…”