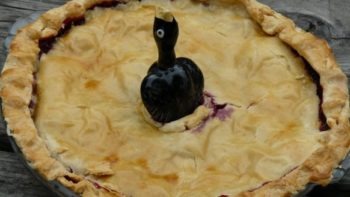 A young man who recently made a mockingbird pie in honour of Harper Lee – the Pulitzer prize winning author of To Kill a Mockingbird – has admitted he never read the book.

Duke University student Dylan Perry acknowledged he was just trying to impress his girlfriend Victoria Brenner when he ‘made’ it for her, on the book’s 60th anniversary.

However the university’s student newspaper The Chronicle which broke the story last week, reports that he now admits ‘I just bought some dumb pie in a store’.

The paper says Brenner has since gone into hiding, as word of her moron boyfriend’s legendarily low IQ, spread on campus.

Perry meanwhile, said he still doesn’t understand what all the fuss is about.

“I know I told everyone there were actual mockingbirds in it,” he grumbled,” but that was only because I figured it had to be a trick question? Why wouldn’t you want there to be mockingbirds in a Mockingbird pie.”

“I’m officially done with English students,” Perry added, “from now on I’m sticking to sports girls…like coach said we should?”