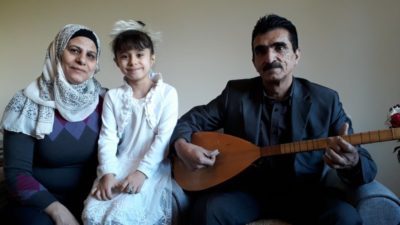 Syrian refugees face many challenges including family separation, the trauma of war and poor English language skills but none of these compare to the challenge of living in Leitrim.

One man living in Carrick-on-Shannon is trying to cope, by sharing his native music.

At home, Mohammad Syfkhan and eight-year-old Noor perform a Kurdish song, to drown out the surround-sound of country & western music being played by neighbours on both sides.

Afterwards he weeps uncontrollably, as he describes their anguish at hearing tracks like Daniel O’Donnell’s “I Just Want To Dance With You“, at eight o’clock in the morning.

“Is like, how you say, the waterboarding” he whispered in heavily accented English, “no?”

They often dream, he added, of living somewhere more diverse, like Tallaght or Moyross in Limerick but have accepted their wish is unlikely to come true this Christmas.

“And who is the Declan Nerney?” he wondered aloud before falling into a bewildered silence.