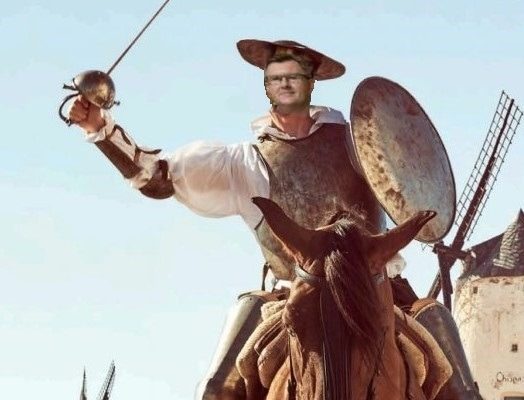 Sir Jeffrey du Lagan has announced that he is to lead a quest to find the middle ground of northern Ireland’s politics. Once he has located it, he will summon and saddle the mythical unicorn of Unionism and ride it into battle against the Sinn Fein sorceress, Michelle La Fey.

Good Sir Jeffrey was crowned leader of the DUP unopposed because he was the only one able to draw the sword from Edwin Poots’ back. ( All the other contenders were too busy trying to shove it farther in. ) Then forward strode bold Sir Jeffrey in a way that was at once both humble and quite fetching.

And lo, he did smite them left and right with the very sash his own dear father did wear – which they did not mind very much for it was but a sash? Then reaching down with both of his glove-ed hands, he did grasp the handle and shouting some cod Elizabethan-English, he verily did pull it free in one smooth go. For he was very dapper about that sort of thing, being a Sir and all.

“Huzzah,” shouted the pollsters all at once, as they knelt to pledge their fealty to him, “From one poll even unto the next”. For is it not said – by the kind of people who say this sort of thing – that in Ulster’s Greatest Hour of Need, will come forth a knight who will restore the land and its people to greatness? And build that mad bridge between the two realms, no matter what King Boris Breakpromise was drinking when he announced it.

For all of this was foretold in The Ballad of Brave Sir Jeffrey which Sir Jeffrey himself did most generously write down and give to the people to sing for him, whenever he was forced by monstrous circumstance, to walk amongst them. The ballad tells of how a humble knight, ‘alone and palely loitering’, was at first cruelly rejected by the party’s 32 member electoral college.

In it, he paints a poignant picture of the inner turmoil in the life of this most noble chevalier.

What can ail thee, knight-at-arms
So haggard and so woe-begone?
Thy granary is full
And Brexit is won

Alas, the ballad foresees the loss of a great many seats, if Sir Jeffrey cannot slay Protocol, the voracious dragon that stalks the land.

I saw pale kings and princes too
Pale warriors, death-pale were all
They cried: “The Northern Ireland Protocol
Hath thee in thrall!”

In other news, apparently “The sedge is withered from the lake and no birds sing”.

This is understood to be a reference to the second greatest challenge facing Ulster, that of climate change.