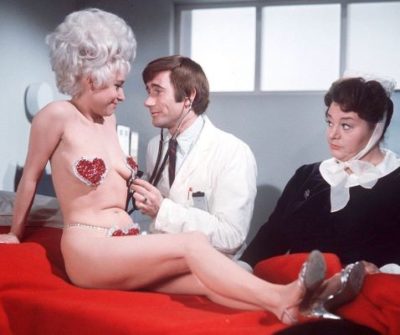 Dame Barbara Windsor, the blonde, buxom, brassy pub landlady with a heart of gold, has gone to that great Inn in the Sky that never closes.

In the early days, saucy Babs was renowned as much for her mucky mouth, as her ‘ability to mix with murderers and royalty’. But the public loved her best for her no-nonsense, down-to-earth, lack of airs and graces.

Frank Sinatra, Charlie Kray and “the quiet Bee Gee,” were reputed to be just some of the famous notches on her bedstead.

The giggling, big hearted queen of the screen also had a passionate ten year affair with Sid James, after which he died of exhaustion.

Starting in the Swinging Sixties, Babs got “plenty of exercise,” before marrying two tossers in a row and then finally finding true love with her third husband who looks just like that guy in The League of Gentlemen.