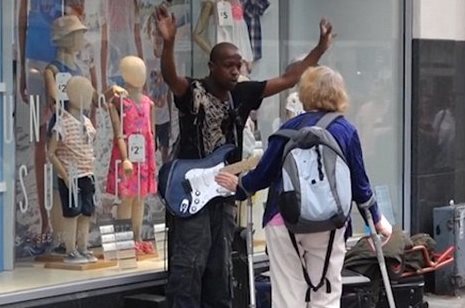 An outpatient discharged from A&E yesterday evening, spent the day recovering in “a rundown little tavern back in old Galway town,” before later wandering outside to abuse a busker.

“I tried singing over her,” he sighed, “but she kept yelling ‘There’s no such thing’ or ‘Sing something else’…so I did.”

When asked what he had sung instead, he replied ‘No Woman No Cry‘.

An off duty nurse who happened to be passing and was familiar with the woman on crutches, said she was regularly treated for ‘PAFO’.

PAFO, she explained, is a widely known medical acronym for ‘Pissed and fell over’.

But instead of Bob Marley, she suggested, Bam should really have been singing a UB40 song.

“‘Red, Red Wine,'” she suggested, “that would have been a lot more appropriate!”