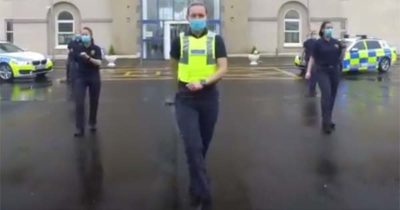 The people who never tire of telling us, “the innocent have nothing to worry about,” are exhibiting worrying signs of fatigue.

But the Garda Representative Association, displaying the hallmark lack of self awareness for which it is justifiably renowned, said that it was committed to testing that was “fair, measured and balanced but not that totally out of the blue, no advance warning crack?”

“After we done the Jerusalem dance video,” a spokesman seethed, “I thought we’d seen the back a this but this is the thanks we get. Random testing – it’s taking the fucking piss!”

Meanwhile the association of Garda Sergeants and Inspectors bluntly said it was “alarmed about reports that testing will commence within six months”.

“Speaking off the record,” she added, “there are nowhere near enough rehab places to get everyone clean in that timeframe.”

She later denied she had her fingers crossed when she made that statement.

Or that it conflicted with the launch of a new anti-corruption unit specifically set up to tackle “high level fears” that some gardaí are taking drugs.

Although she later conceded that, under the circumstances, ‘senior’ would have been a more appropriate word to use than ‘high’.