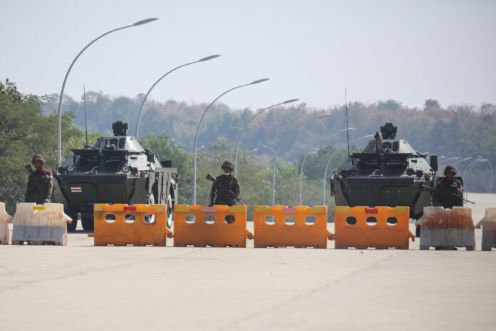 The British government was ‘stunned and aghast’ to learn that another of the many pariah regimes it regularly sells arms to, is using those same weapons to crush human rights.

A spokesman who couldn’t look anyone in the eye, insisted that “Britain was completely aghast at and completely surprised by this entirely unforeseeable development”.

He angrily rejected the suggestion that the UK couldn’t have been surprised by the news because Saudi Arabia is currently doing ‘exactly the same thing’.

“Saudi is using British arms to crush human rights in the Yemen, not in their own country,” he sniffed, “it’s an entirely different thing!”

The hunted expression soon returned however, when he was asked if it was true that the UK was the second biggest arms dealer in the world, from Saudi Arabia to Myanmar.

“I would pre-pre-prefer,” he stammered, “to say we are the second most successful supporter of democracy in the world.”

He ‘could not agree’ that indiscriminate arms sales of £11bn annually, were damaging Britain’s human rights reputation, he said.

“Because,” he added in reply to further questions, “as soon as we make another season of The Crown, the press will completely lose interest in this…um…non story?”