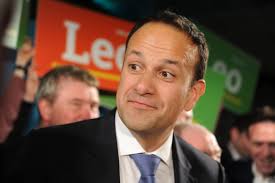 Asked if “mandatory but not compulsory”, was as meaningless a phrase as ‘Brexit means Brexit,’ Taoiseach Leo Varadkar said that wasn’t for him to say.

“But what I’m not prepared to do,” he added, “is to simply throw a good woman under a bus,” adding that “if circumstances change however, I may have to push her under one?”

Adopting his customary ‘head prefect’ speaking-style to make this announcement, he confirmed he would not be asking Ms Fitzgerald to resign and nor would he accept her resignation if she offered it. “Instead,” he said, “I will simply release her undated letter of resignation, the one all ministers are required to sign before they’re appointed.”

When asked if he thought Ms Fitzgerald had told the truth about the Garda controversy, he said telling the truth in government is “neither mandatory nor compulsory”. Fine Gael have lost too many good ministers to the endless search for truth in government, he observed, and if there’s any more truth, there won’t be any more government!

Before leaving the podium, Mr. Varadkar declined to answer a question from a well known music magazine about his strong visual resemblance to Rowan Atkinson’s comic character, ‘Mr. Bean‘.