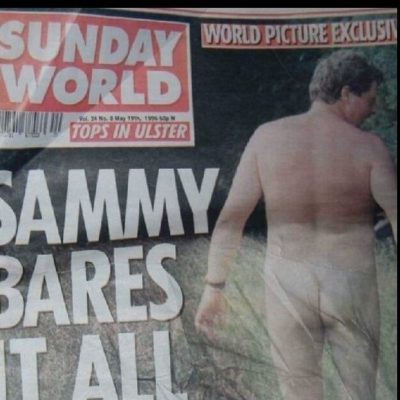 The day began, as so many in northern Ireland do, with an Olympic Gold medal-level exercise in hubris by Sammy Wilson.

Fresh from foaming at the mouth about how French President Emanuel Macron didn’t seem to realise northern Ireland is, an “inseparable part of the UK”, Wilson then adopted a position that even hardened contrarians would struggle to defend.

Wilson actually warned the British government not to intervene in northern Ireland, aka, the “inseparable part of the UK”.

A performance that called nothing to mind more than the provincial Kerry newspaper that in 1914 – in an equally self-important manner – warned the Kaiser: “The Skibereen Eagle has its eye on you!”

Wilson claimed the executive was undermined whenever the British government passed legislation the DUP was obstructing, such as abortion rights or an Irish language act.

The French, no strangers to contradiction themselves, are said to have struggled ‘late into the night’ to formulate a reply to Wilson’s position.

This is thought to be a coded reminder of the events of May 1996 when Wee Sammy was publicly accused of ‘naked hypocrisy,’ after the Sunday World published a series of candid photos showing him and his then girlfriend sunbathing naked in France.

A long and fraught meeting of party officers, eventually decided to take no action over the most serious charge – that of holidaying in France – provided he gave a written guarantee, never to do so again.

It then emerged that Wilson – still widely believed to be the DUP’s only nudist – had earlier voted against allowing nude bathing at a council-owned swimming pool in Belfast.

The stolen pictures were posted anonymously to the paper with three of the 22 negatives being described as, “of a sensitive nature”.

Subsequently, a spokesman for Wilson insisted he’d been nicknamed ‘Wee Sammy,’ long before the pictures were published.