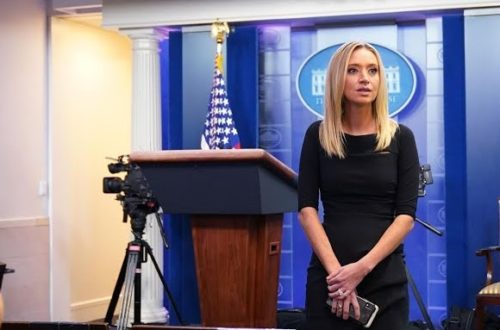 White House press secretary Kayleigh McEnany set a new record for the job when she took her first question from a reporter.

The question was, “Will you pledge never to lie to us from that podium?”

Without missing a beat, McEnany replied: “I will never lie to you. You have my word on that.”

After some muted quibbling, the press pool marked that down as two consecutive lies.

A moment later, discussing the dozens of sexual accusations against the president, she again broke her promise by claiming the president had “always told the truth on these issues.”

The New York Times’s Annie Karnini smiled broadly in response to this statement and accepted coded signals of congratulations from the rest of the pool.

Afterwards she repeatedly refused to confirm she’d won the briefing’s ‘sweepstakes’ on how long it would take McEnany to tell her first three lies.

However she then winked, mimed pulling a slot machine handle and added, “Kerching!“