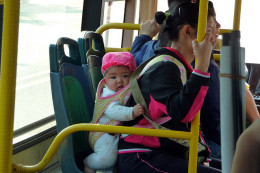 Have you ever felt violated by being forced to watch a woman you’ve followed onto the upper deck of a bus, breastfeed in public?

If so, fear not. Here are some practical steps you can take to counter ‘leaking lactating liberals’ and their sordid plans to defile every public space with their filthy socialist experiment.

Remind them that the word ‘common’ has the same Latin root as ‘communism’, hence breastfeeding in a common area is an attack on the free market and our own personal freedoms.

Ask them if they’re aware that breastfeeding hampers private enterprise by depriving formula feed manufacturers of sales that would otherwise have helped them to grow.

Point out that no less a person than the president of the entire free world (plus the shithole countries), Donald John Trump, once vomited all over himself when the word breastfeeding was spoken aloud in front of his innocent daughter-wife, Ivanka.