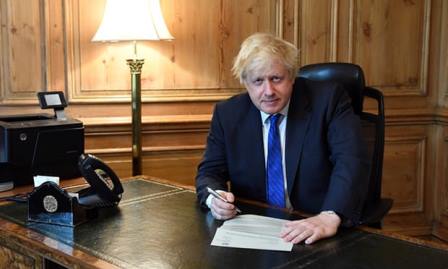 “It’s not for me to invite comparisons with Winston Churchill,” a smirking Boris Johnson told a Brexit press conference today, “simply to remind you that the choice is yours to make”.

Johnson, a member of the actors union Equity, was announcing his resignation from Teresa May’s cabinet in protest at a plan he’d voted for the day before.

The former foreign secretary grew angry when he was again asked if Churchill would have avoided a controversial commons vote – as he had done over Heathrow expansion – because to have kept his word would have achieved ‘absolutely nothing’.

He claimed his words had been “distorted by the media” because they had secretly recorded them and then played them back to him.

When it was pointed out that he had made his remarks at a public meeting, he changed the subject and urged everyone to look at “the bigger picture?”

Before finishing, Johnson said he wanted to promise the people of Great Britain one simple thing.

“I want to promise you I will always be a straight talker,” he continued, “no matter the cost to me or my career. Because as I think my record clearly shows, I am nothing, if not a man of my word!”

Afterwards, a straw poll of journalists agreed it was true that he was nothing and definitely not a man of his word.