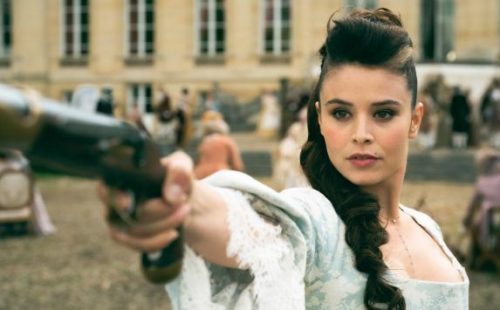 ‘Architect’s wife & mother of two’ Iseult O’Malley, who is married to Dave, glared at him in return.

“Can you please not ruin it for me?”

“How could I ruin that”, Dave said, levering himself upright, “it’s the greatest TV cliché there is these days.”

Responding later to a call from the newsdesk, Dave explained they’d been watching a drama centred on the run up to the French revolution.

“Out of the blue, the outspoken, beautiful and thoroughly modern young heroine, delivers an implausibly prophetic warning about the likelihood of imminent revolution,” Dave said in a voice that implied he was more than unable to suspend his disbelief.

“She is not only wise beyond her years, kind to children, old people, strangers and animals but courageous too and yet the men she warns, scoff at her!”

“Next, in an era when every male aristocrat owned a gun, they all turn to clay pigeon shooting but whereas all of the men manage to miss every single time they shoot, she never misses, not even once!”

Which was every bit as predictable, Dave pointed out, as all those people on American TV shows who only walk into the kitchen to announce they’re too busy to eat breakfast.